To Celebrate the birth of baby cheeses we decided to throw a ruddy great big dirty skuzzy party in the little bastards honour.

we cant wait to see your little rosy cheeks at the Crofters Rights
come and grab a Donut ya filthy animals!

A blister of fuzzy guitars wrapped in angular hip hop riffs, mercilessly twined with broken beats, fire cracked snares and primitive howls loud enough to wake the dead. An audio assault that should not be missed.

“With their full on, audacious attitude in both image and music, it’s certain that we’re going to be hearing a lot more from this duo in the future, following the release of this single.’
– GIG SLUTZ

“They pack enough sound to keep you in a drunken frenzy for days, playing fuzzy full-bodied riffs accompanied by the sexiest hip-hop beats and howling vocals to match.”
– SUBBA CULTURE

RAPTOR
are a Psychedelic Blues-Rock trio comprised of brothers Kurt & Adam Fletcher and Lou Hopcutt. The band formed in the quiet depths of rural Herefordshire and released their Debut E.P. on Friday 13th February 2015 to much critical acclaim, showcasing their fuzz driven guitar grooves and hard-hitting drums.

MONOCLE
Monocle started in 2016 and spent a year locked away, thrashing out songs of heartbreak and hedonism. Emerging onto the scene in 2017 they found themselves sharing bills with Bristol’s punk regulars.
This punk incubation – and the hard knocks of austerity Britain – turned their focus to corruption, decay and the emptiness of our digitalised era.
Rejecting the empty platitudes of mainstream music, theirs is a call for collective outrage to shake up an increasingly apathetic world. 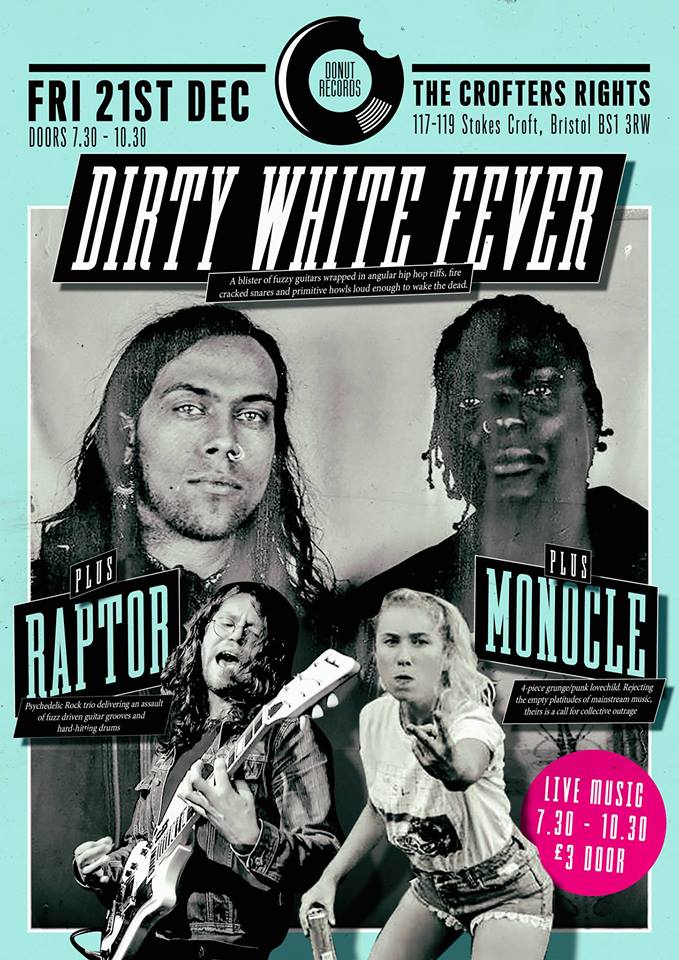